Written by FLPC on January 28, 2019 in Uncategorized 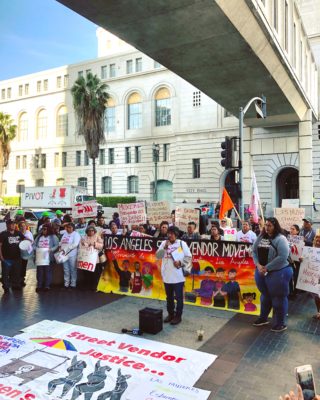 Sidewalk vendors have been a vibrant part of the food scene in Los Angeles for decades.[1] Walking down the streets of LA is a visual, audial, and aromatic journey as vendors set up on sidewalks and city parks. The aroma of tamales, tacos, and pozole wafts through the air as vendors, many of them immigrants, sell goods and food from the cultures of their native countries. Until recently, however, sidewalk vending was not only illegal, it was criminal. Fortunately, the dedication and determination of street vendors has resulted in many years of political organizing and legal battles, ultimately resulting in a community of vendor-led advocates that successfully worked towards the legalization and decriminalization of vending in Los Angeles.

Roughly 50,000 Angelenos make a living as vendors. Vending provides these entrepreneurs a way to support their families as well as provide a much needed service for their community. Vendors allow for communities to buy local and create a local economy. Additionally, some vendors often provide the only source of fresh food in what would otherwise be a food desert.  Other vendors may sell culturally important food and merchandise to predominantly immigrant communities that otherwise would have limited access to these goods. 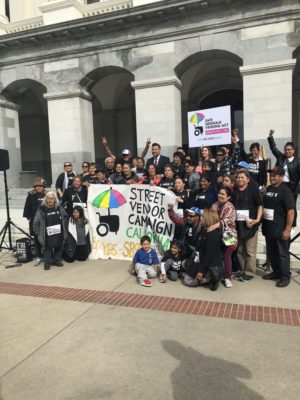 Legal issues, racial discrimination, and even violence have affected the street vending community for years. Both police and immigration officials have cracked down on vendors recently, and violations have been prosecuted as criminal misdemeanors or infractions. Penalties ranged from fines up to $1000 for a misdemeanor to the threat of arrest and even jail time. For many immigrant vendors, these interactions affected access to citizenship programs and increased the risk of deportation.

Despite these dangers, street vendors have persisted through the years. Many vendors see the work as a way to make a living and to escape economic problems such as inadequate pay or wage theft. Others see it as the first rung on a ladder of economic success. Many vendors dream of building their sidewalk vending business into a brick and mortar restaurant or shop one day.

Since 2011, the Los Angeles Street Vendor Campaign (LASVC), a vendor-led coalition, has been working to legalize street vending – first in LA and eventually across the state. LASVC works with community organizers, food justice advocates, economic development organizations, and attorneys all over the city to end the criminalization of street vending and to create an inclusive permit system for legal sidewalk vending.[2] The coalition puts a major focus on building leadership within the vendor community itself in order to shift the power dynamic. 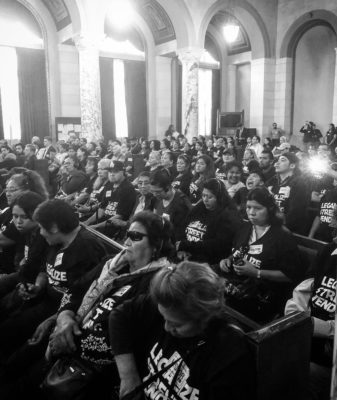 The campaign started by organizing Town Halls as a way for vendors across the city to get together and discuss specific challenges they faced and the priorities of individuals. By 2013, organizing efforts and political pressure resulted in a city council motion to look into the workability of legalizing street vending. The campaign drafted a model ordinance for decriminalization and legalization in 2014. Over the next few years there were various public hearings regarding legalizing street vending, but no policy was adopted. All the while, vendors continued to suffer and LASVC persisted by pressuring the city through demonstrations and organizing. 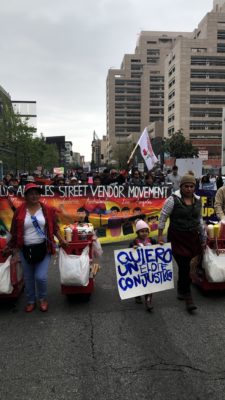 With the election of Donald Trump and the incoming administration’s proposed policies towards immigrants, Los Angeles city officials realized they needed to take some steps to protect immigrant communities. Using this momentum, LASVC pushed through a January 2017 ordinance which decriminalized vending in the City of Los Angeles. While still prohibited, street venders were now only subject to administrative fines instead of criminal charges.

By 2018, LASVC was growing dramatically. Vendors and advocates began hearing from other cities in California and it became clear that the problems experienced in Los Angeles were occurring statewide. In January, State Senator Ricardo Lara met with LASVC in Los Angeles and then introduced SB 946. SB 946 would decriminalize sidewalk vending in California as well as provide retroactive relief allowing vendors with pending charges or prior convictions dismissed. The Bill also provides standards for local governments to legalize and regulate sidewalk vending. Vendors and allies across the state began to advocate for SB 946 by providing testimony at Assembly and Senate hearings as well as meeting with elected officials across the state.

In September, 2018 SB 946 was adopted by the legislature and signed by the governor. By November, the LA City Council approved an ordinance to legalize sidewalk vending across the city. Vendors across Los Angeles as well as other cities in California now have the opportunity to participate in a legal economy as well as clear any previous records under the retroactive relief provision of SB 946.

The legal battle to ensure Los Angeles communities have access to the right to participate in street vending activities is far from over as organizers and legal advocates now work out the implementation of the city ordinance and state law. However, the recent win for this community is a beacon of hope and a prime example of how community organizing and community-centered policy making can help ensure that communities achieve their desired goals, and of course, access to their desired foods. 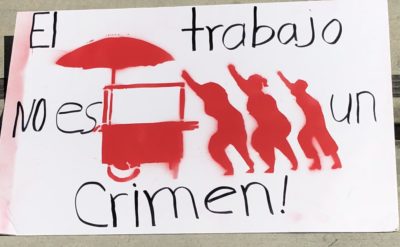 [1] Street vendors in Los Angeles include “sidewalk vendors.” These are not permitted food trucks or loncheros, but consist of smaller operations set up on sidewalks and in parks that sell both food and merchandise.